During this election cycle I’ve been reading from multiple Christian traditions on the integration of faith and politics. I discovered a long time ago that people of deep faith come to the political process in different ways–ways that grow out of deep understandings of the Christian faith.

So, I was excited when the publisher of How Would Jesus Vote? offered to send me a copy of this book to read and review. Since I’ve come down with a nasty case of bronchitis I’m not able to put the time into writing my own review, so here is the publisher’s summary of the book and a review from Publisher’s Weekly. 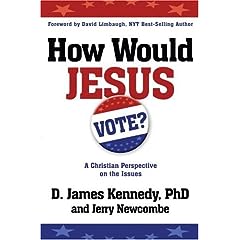 Book: How Would Jesus Vote?

Summary: The 2008 election is shaping up to be one of the most important political contests in American history. In fact, Dr. D. James Kennedy believes it will be a watershed moment that could impact our very survival as a nation under God.

Values voters—people whose political views and votes are based on their faith in God—are being targeted as never before. As the campaign season moves forward, the significant players will debate terrorism, radical Islam, nuclear threats, global warming, social issues, gay marriage, immigration, education, health care, and many other essential issues that can create sharp ideological divisions.

Into this overwhelmingly complex political situation, Dr. Kennedy and Jerry Newcombe bring a clear, compelling, and nonpartisan exploration of what God’s Word has to say on these critical matters. How Would Jesus Vote? isn’t intended to tell readers which candidates to support; rather it offers a Christ-centered understanding of the world to help readers draw their own political conclusions.

From Publishers Weekly: In his final book, Kennedy, who died in September of this year, joins his Coral Ridge Ministries colleague Newcombe in proffering this biblical justification of their socially conservative position on issues important to their followers, including abortion, the death penalty, war, education and freedom of religion. Kennedy and Newcombe make provocative claims throughout. Regarding abortion, they cite a study that found that 99% of women who have had abortions now wish abortions were illegal. About allocation of government funds, they argue that money currently spent on school lunch programs would be better spent on national defense against jihadists. When discussing health care, they accuse England and the Netherlands, both countries with national health services, of killing babies and the elderly. Such remarks are paired with what Kennedy and Newcombe characterize as a humble search of the Scriptures, and each chapter ends with a summary of how the authors feel Jesus would have American Christians vote. While most of this book is standard conservative Christian fare, Kennedy and Newcombe give it a distinctive Calvinist flavor, focusing particularly on Calvin’s belief that God has distributed this world’s goods as he has seen fit, and that not all poor people are deserving of Christian charity.